Feed Me…Feed Me
Food of the Month: Kale 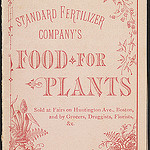 by Nancy Denison
During my final ten years of teaching first grade and kindergarten, I had a fish tank in my classroom.  It had a calming effect, was science related and it was a lot of work.  Once a month I had to clean it but usually I stretched it to a quarterly cleaning.  By then it was pretty gunky but that gunk was like liquid gold.  Into a bucket went the sucked up gunk off the bottom. I added about a third of the old water, mixed it all together and voila, an organic plant fertilizer, which fed my school and home indoor plants!

I don’t have the fish tank anymore, but I still have lots of indoor plants, so now is the time to investigate what’s available for my (and your) collection.  Indoor plants need the same food as outdoor/garden plants; Nitrogen (healthy foliage), Phosphorus (root growth) and Potassium (big, healthy blooms).   Some fertilizers are synthetic, some are sold in granular/crystal form, liquid, stick or tablet form, and some are organic, made from seaweed, fish emulsion or earthworm castings.As a general rule, use indoor fertilizers every two weeks from February/March to August/ September.  During the darkest days of winter fertilizers are not beneficial due to the reduced light and temperatures and in fact could be detrimental to most plants.  Advantages to fertilizing are increased growth, greener leaf color, and flowering and more disease/insect resistance.  Disadvantages can take the form of leggy or overgrown plants and the loss of lower leaves.  When applying fertilizer, always follow label instructions and try to make sure the solution runs out of the bottom of the pot to reduce the chance of root burn.

Most garden centers carry several varieties of indoor fertilizers.  At Garden Goods in TC, I found the granular-time release Osmocote, liquid Miracle Grow and water soluble, seaweed based Maxsea among several other brands/forms of fertilizers.  I’m attempting a little experiment with all three and some spider plant cuttings, so I hope to be able to report my fertilizer findings in a future Real Dirt.  In the meantime, here are a few fertilizer recipes from me and “America’s Gaster gardener”, Jerry Baker…

½ TBSP Bourbon (or other whiskey)

Mix all together with one gallon warm water 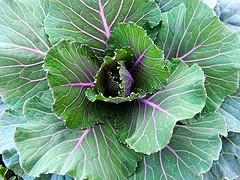 Food of the Month: Kale

by Michele Worden
Introduction:  Do you eat kale?  Kale is a hot commodity, a trendy food right now.  Kale chips compete with tortilla chips in convenience stores, and for the first time baby kale leaves are available in clamshell containers in major grocery stores.  Read on if you want to know more about Kale, the ‘Superfood’, and why everyone needs more kale.  As a bonus, try the immune system boosting Kale Smoothie recipe at the end.

Description:  Leaf plant (non-heading, unlike it’s cousin the cabbage), which can have curly leaves or flat leaves.  Color can be purple, greenish blue, dark green, brown or green with red veins.

Origin:  Believed to be Asia Minor or Europe; it has been in cultivation for 2000 years, from the Mediterranean to the North Sea.  It was a favorite food of the Romans and Greeks.  In the Middle Ages it was a common green vegetable in Europe.  English settlers brought kale to the Americas in the 1700’s.  Today it is eaten all over the world.

Cultivation: (how and where grown):  Kale is a biennial, which means it produces yellow flowers in its second year and then dies.  It is a cold weather crop and overwinters in the garden.  It tastes sweeter after a frost because the carbohydrates in the leaves are converted to sugar in cold weather.  In hot weather kale becomes bitter.  Like all brassicas, kale seeds germinate in 3-5 days with close to 100% germination rates, making it a great plant for school gardens or science experiments because kids see quick results.  It is also easy to harvest the seeds and save them.

Fun Fact:  Students love to eat kale grown in school gardens.  It is a favorite activity to go in to the garden after a frost and taste the kale to see if it has gotten sweeter.  I always plant it so students have a snack in the garden during outside activities.

Nutrition:  Kale is famous as a “Super Food” because it is rich in anti-oxidants and anti-inflammatory nutrients, micronutrients and cancer-preventing agents.  It is one of the most nutrient dense vegetables anywhere.  Kale is extremely rich in vitamins K, A, C and minerals such as manganese, copper, calcium, and B6.  It is high in fiber, which aids in digestion and lowers cholesterol.  A serving size is 1-1/2 cup and should be eaten 2-3 times per week to achieve the health benefits.  Kale is also one of the few vegetables that have a small amount of protein.  See this link for a more detailed nutrition profile:  http://www.whfoods.com/genpage.phptname=foodspice&dbid=38#nutritionalprofile.

Note:  Kale does contain oxalates, so persons with kidney problems many have trouble with oxalate crystals (kidney stones) if they eat too much kale.  This is not usually a problem with healthy kidneys.

Culinary Uses:  Most nutritious when steamed but can be eaten raw in salads, boiled in soup and added to stir fry’s.  In the Netherlands it is served in a traditional boiled dish called “boerenkool”.  In Ireland, it is served with mashed potatoes in “Colcannon”.  (A milk, potato and kale meal was nutritious enough to keep an Irish peasant healthy and strong even though his diet lacked much meat.)  In China, Taiwan and Vietnam is added to beef in stir-fry.  In Portugal, it is part of a traditional soup called “Caldo Verde” made with a spicy sausage.    Kale is served with Christmas Ham in northern European countries.  My favorite way to eat kale is in the kale smoothie recipe at the end of this article!  A cure for the common cold?  It packs a vitamin C punch to the cold virus.

Medicinal Uses:  There has been a lot of research on kale’s cancer preventative as well as cancer treatment benefits.  Kale’s nutrient richness stands out in three particular areas: (1) antioxidant nutrients, (2) anti-inflammatory nutrients, and (3) anti-cancer nutrients in the form of glucosinolates.  Kale’s cancer preventive benefits have been linked to its unusual concentration of two types of antioxidants, namely, carotenoids and flavonoids.  To read more see:  http://www.whfoods.com/genpage.php?tname=foodspice&dbid=38#nutritionalprofile.

Chopped kale is sold in cans for older people or babies as nutritionally dense and easy to digest food.  The high fiber in kale helps lower cholesterol.

Variety grown or eaten in schools:    Scotch Blue Curled and Red Russian, because they are pretty!

Impact on Culture:  A winter staple that sustained many villages over the winter when food was scarce in Europe – thus saved lives throughout history.  Believed to have sustained slaves in the old south.  Slave diets were poor except for the kale and collard greens they were allowed to grow that may have prevented malnutrition. In Germany, they have kale tours and festivals in the winter.  In Scottish literature, writers tell stories about kale variety rivalries between villages.

Springtime gives us an abundance of greens and warm days gardening in the sun, making it a perfect time for a fresh take on smoothies to cool you off! By blending in kale, this all fruit smoothie packs an extra punch of protein (2g in one cup of kale) and nutrients (206% daily need for vitamin A and 10% Daily need for Calcium), but besides the fun green color you will hardly be able to tell that it is in the mix. To try it for yourself, blend:

For the best success blending, add ingredients to your blender in the order listed. If you find it necessary, blend the orange juice, apple and banana before adding the kale, water and ice. If you want to make a lot for later or to serve at a party, blend everything except for the ice to make a smoothie mix that can be refrigerated for 4-6 hours. Then simply fill you blender half full, add ice, and blend, adding more ice as needed to reach your desired smoothie texture (freezing your banana adds extra creaminess).