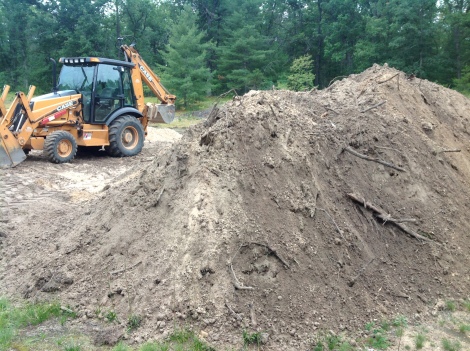 A blank canvas waits for the artist to add color and texture; a newly built house is a gardener’s canvas waiting for the colors and textures created by lawns, shrubs, flowers, and gardens.  But an artist also works on older, worn canvas removing dust and dirt along with repairing flakes and chips.  In the same way, a gardener reworks the home property by removing the dead or dying, adding, rearranging, or replacing plants.  But before starting either project, there are steps that will improve the chances of successfully creating a masterpiece.

This process is dear to my heart because we just built a new home on the site where we have been living for the last two years.  Whether you are looking at reworking your grounds or starting fresh, I hope you will travel through the steps with me starting with soil testing, moving on to the study of micro climate, on to creating a master plan, and finally to implementing your plan.

The first step is a Soil Test.  Testing kits are widely sold, but the test from MSU Extension is one of the best.  It is a simple process.  Last fall, I performed this test on my soil.  I went to the Extension’s web site and then to the on-line bookstore where I purchased the test kit.  The test kit came in the mail with simple directions on collecting the samples and returning them to MSU.  After several weeks, I received an email containing the report.  It included pH, soil content, and advice for amending the soil.  The amendment advice came in both regular and organic forms.  Now, I know one of the first things learned in the Master Gardening classes is that it is “soil” never dirt, but after reading my report the word dirt is a better descriptor.  My pH is 5.1 and organic material is less than 1%.  The combined amendment advice for my soil totaled approximately 200lb/100sq ft.  This will not be something I can accomplish at one time, so amending my soil will be an ongoing process.  Soil is never static; requiring continued amending and analysis.

The next step is to study your grounds for microclimates.  Look for areas where water pools or drains quickly.  Where and when does the sun shine?  Are there differing elevations that form wind buffers?  Are there places that frost early or late? How and where does the snow build?  These questions, and more, must be addressed to create a masterpiece. Studying microclimates takes time.  Every season differs, so it is advisable not to rush into changing and planting.  For me, the advantage is already living on the grounds.  I began the study last year.  One of the interesting aspects of my land is the sunshine.   I live in a small hollow created when the upper layers of the soil were used as backfill for M-131, so the morning sun falls only on the west side while the east side gets the afternoon and evening sun.  There is also one area the where previous owner dug a pit to bury trash.  While the worst of the trash was removed before filling in the pit, I don’t plan to use that area for my kitchen garden.

This leads to the step of creating a master plan and implementing that plan.  If you would like to read more about the process of planning and how I’m going to use my two acres, look for the next edition of the Real Dirt.

In the meantime, start a list of all the plants you love and then we’ll see where that list takes us.
top